The miracle of conception

If we consider all the complex hormonal processes leading to pregnancy and all the hurdles sperm must get over to fertilize the egg, we can surely speak of "the miracle of life”.

As soon as the period stops, the pituitary gland, a small gland at the base of the brain (behind the eyes), secretes the FSH hormone in the blood. This hormone acts on the ovaries that contain thousands of eggs. A woman is born with more than 3 million eggs, and this number goes down to 400,000 at puberty. The eggs are exposed to FSH and only a few, an average of 400, will mature during a woman’s fertility period.

How does ovulation work?

During the menstrual cycle, the ovaries release an egg (sometimes more) alternatively. Ovulation thus occurs in one ovary at a time. The "dominant" egg grows on a wall of the follicle, surrounded by the granulosa cells, which feed on nutrients and produce estrogen. This hormone stimulates the development of the uterine wall and breast tissue. The estrogen level in the blood increases and sends a message to the hypothalamus (the brain's control center) indicating that the follicle is mature and ready to ovulate. The hypothalamus therefore ask the pituitary gland to release a hormone called LH. This hormone releases the egg within 36 hours. The egg then escapes from the follicle. This is called ovulation.

The egg already contains chromosomes, carries genetic information and can only let a single sperm in. The egg will be drawn into the fallopian tubes with thin fringes. The egg thus travel in the fallopian tube, up to the uterus. Meanwhile, the cells that remained in the follicle form a mass in the ovary called the corpus luteum. This corpus luteum begins to produce progesterone, which acts on the uterus, breasts, hypothalamus and pituitary gland. In the uterus, it promotes pregnancy by making the necessary nutrients to the embryo and thickening the uterine wall  tissues. If the egg is not fertilized, the levels of FSH and LH fall quickly over time, and the corpus luteum subsequently atrophies. Falling levels of progesterone trigger menstruation and the beginning of the next cycle.

What about the man? 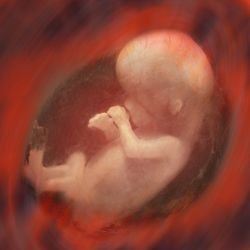 A man ejaculates an average of 5 ml of semen, containing between 100 million and 300 million sperm. Less than 100,000 of them manage to pass through the cervix. Only about 200 will make it through the fallopian tubes and only one will fertilize the egg.

It takes about 24 hours for a sperm to penetrate the egg and fuse with the nucleus, and for the egg to start dividing. The new cell resulting from this union is called a zygote.  Pregnancy starts. Tiny hair-like cilia lining the fallopian tube propel the fertilized egg (zygote) through the tube toward the uterus. The cells of the zygote divide repeatedly as it moves down the fallopian tube. The zygote enters the uterus in 3 to 5 days. In the uterus, the cells continue to divide, becoming a hollow ball of cells called a blastocyst, which starts making the HCG hormone that sends a signal to the corpus luteum to continue producing progesterone.

Karine Bergeron is a doula who studied nursing and is currently completing additional training in prenatal care. As mother to little Laurence, volunteer for L’entraide maternelle, breastfeeding godmother and prenatal class teacher, it’s with joy that she dispenses her wisdom for Motherforlife.com. Bergeron is passionate about prenatal care and ready to share all her knowledge to help you enjoy life’s greatest gift: becoming parents. To find out more or ask questions, go to mereetmonde.com and look for her in the “Équipe” section.

Half-truths, myths, facts and rumours about conception and fertility are spreading around faster than wild fire. Here are 12 pieces of information to help demystify the true from the false!

Inspired by current events, Edith Charbonneau gives us an update on the assistance that acupuncture can provide in cases of infertility and fertility treatments.