Of all the situations involving a violent behaviour, very few are met with such misunderstanding, denial and even contempt. We often hear that the abused person should have left beforehand and that she might even have brought it on herself. Yet, domestic violence pervades the lives of people like you and me, of all backgrounds, and makes life a living hell for those who are stuck in a difficult family situation.

There are 5 types of domestic violence: verbal, psychological, physical, sexual and economic. Besides the fact that 8 out of 10 victims are women, nearly half of the 17,321 victims who contacted police services in 2008 were injured during the offense.

There are five types of domestic violence: 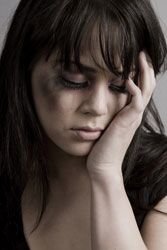 Physical violence is easier to notice because the victim has no doubt that she is, indeed, a victim. Family and friends could notice bruises and everyone understands the emergency and that it must stop before it gets worse. However, other forms of violence are equally devastating and their insidious nature sows doubt in the mind of the victim who sometimes questions her own judgement. This is when the cycle of violence settles in.

This is not a myth; a person stuck in a cycle of violence finds it hard to get out because she knows that a moment of peace will come after each crisis. This phase called “honeymoon” comes quickly and its semblance of peace gives the tired person a break that will be enough to wait a bit before finding the energy and courage to go away. However, the fact that the victim stays with a violent person alters the perception of friends and family who desire less and less to help because she stays there as if it was acceptable. The person feels less supported, endures more events and the situation worsens. 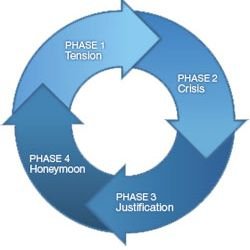 Fortunately, nowadays, the police is allowed to file in a complaint with or without the victim’s consent when arriving on the scene. This is how a neighbour who calls when he hears screams or suspicious sounds can save a life, literally and figuratively. According to a SPVM policeman: “It is the only way we can avoid complaints withdrawal. Before that law passed, I don’t know how many times a woman withdrew her complaint and was found dead a few weeks later. We want to avoid this kind of drama.

Often, the victim was able to perceive signs of violence at the beginning of a relationship. Broken objects, raised voice and misplaced comments in front of friends about a gift or about the couple’s sex life are hints that everything is not hunky dory. The person who thinks that these events are very little compared to the person’s qualities justifies this behaviour and opens the door to far worse. From one insult to another, this lover who was worth defending will become a nightmare and the denigrated person who has made an mistake feels very little when it is time to put her foot down. The situation escalates and violence becomes part of everyday life.

If the victim has completely lost confidence or hopes that the violent person is only having a rough patch, she will need a crisis or to accept someone else’s help to get out. Friends must understand that the victim is tired, down, scared, often threatened and fears or her children who have already seen too much. Friends should never give up because this person really needs help.

A neighbour who calls, a family member who visits often or a devoted friend might give an opportunity to make the leap. So even if it takes a while, if you intend to help someone; you should know that several resources are available to help you do the right thing. 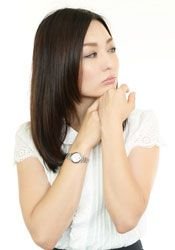 If you are a victim of domestic violence, remember that there is a life after you breakup. Your children will be glad to find a happy mom and even if you feel bad about yourself right now, know that it will not last. Do not hesitate to seek help. Structures are in place and either with the help of your family, police or in shelters, you will find someone listening and it will come from persons who truly want to help you without judging your decisions and your misfortune.

The last objective will be to find inner peace. It will take a lot of time and positive interactions. A former victim taking over the activities she loves after years of control will eventually feel revived. Appreciating these moments of calm, celibacy and joyful motherhood will finally give the victim a sense of freedom and you can be certain that she will not get caught again.

All you need is love: Keeping the right attitude and believing in love when searching for a partner

Love doesn’t only happen in fairy tales, despite what some may believe. Whether you’re a man or a woman, love happens differently for everyone and is entirely what you make of it.

My love life is a mess

Some people wonder what they must have done in a previous life to be doomed to one sentimental failure after the other. Is it your case?

Pumpkin, love, darling, dad, mom, gorgeous, sweetie, babe… What do you call your husband? Your partner? Your boyfriend? Do you use love nicknames?

“Imagination is more important than knowledge”, said Einstein. In fact, imagination is not only an amazing tool, it also guarantees that your child will never run out of ideas and resources.